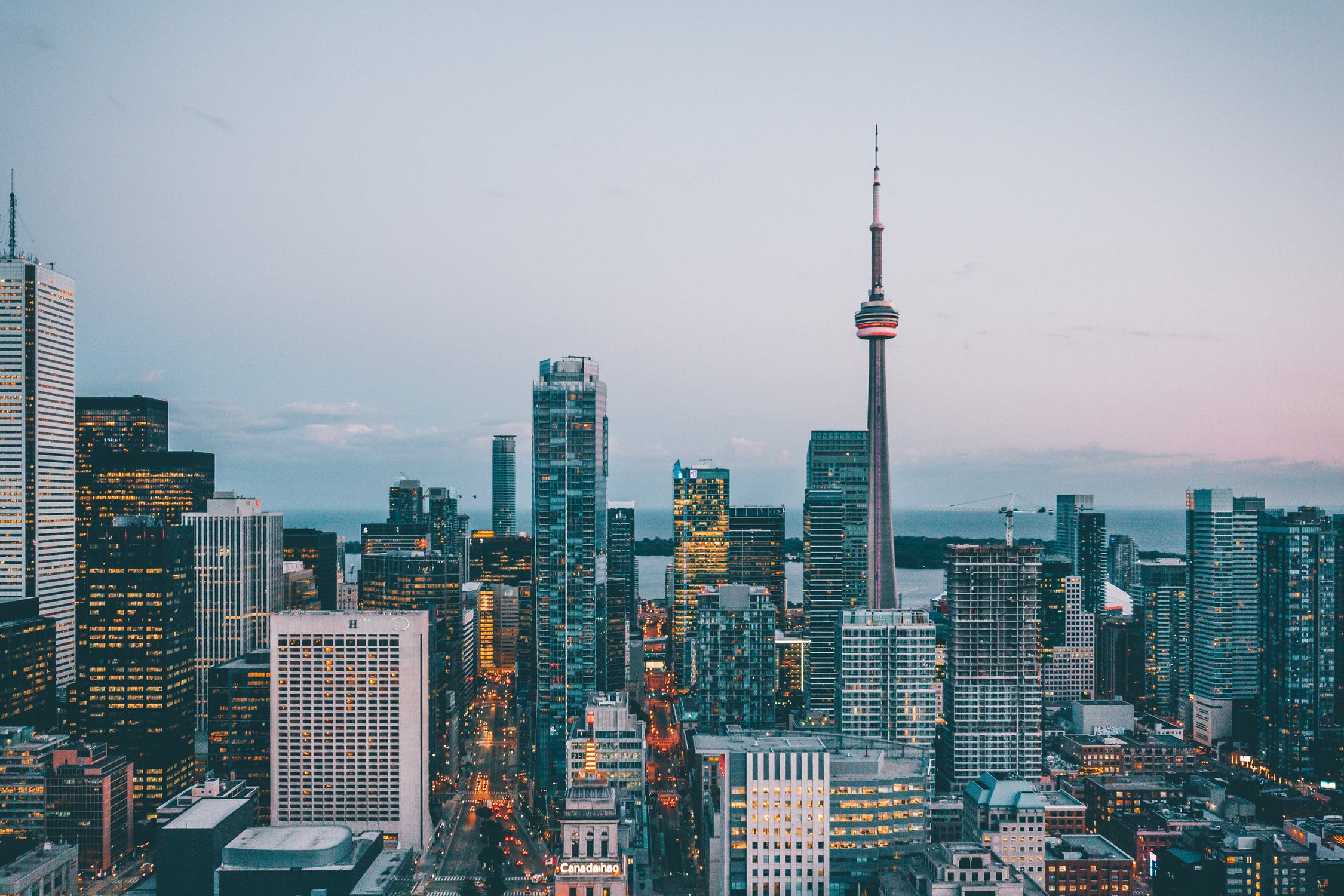 As featured in our Top Business Travel Destinations for 2018 , Toronto is the fourth largest city in North America homing 5.9 Million people. With 50% of the population born outside Canada, Toronto has a reputation for being a welcoming, diverse global city.

The financial capital of Canada, Toronto is ideally located between New York City, Chicago and Montreal, as well as being within a 90-minute flight for over half the U.S. and Canadian population.

In this guide, we provide corporate travellers with all the information they will need when spending time travelling for business and some of our favourite places we have visited. From weather forecasts, transport links, what to see, where to eat and much more…

Toronto Pearson International Airport is the primary international airport serving Toronto and its metropolitan area. The largest and busiest airport in Canada, it serves just over 47 million passengers a year by 60 airlines, with Air Canada’s hub at the heart of the airport.

Toronto’s compactness means that its remarkably easy to get around, with a small metro and tram system. There’s the Distillery District (former grain stores converted into restaurants, cafes and posh boutiques); hippy Dundas West with cafes and bars; and slick downtown, Toronto’s Financial District and home to its skyscrapers.

In Toronto, the public transportation system that operates buses, subways, streetcars, and para-transit services is called the Toronto Transit Commission – widely known as the TTC

The backbone of the TTC is a subway system with two lines, Line 1 Yonge–University and Line 2 Bloor–Danforth, running along principal streets and connecting Toronto's outlying areas with its downtown core Single Fares average $3.25 with weekly passes costing $43.75 perfect if you are visiting for a lengthy amount of time.

Travelling by taxi is naturally pretty common with so much to see and do. The city of Toronto has set standard fares to hire a taxi which are designed to protect both the customer and the drivers. The fare means that anyone using a taxi in Toronto is charged the same rate no matter where they are or what time of day it is, meaning customers won't be overcharged when they ride in a licensed cab, without having to bargain or negotiate.

Buses run on the same pricing system as the Subway mentioned earlier, with Daily passes costing $12.50 Single Fares $3.25 and weekly tickets costing $43.75. They are easy to take and cover virtually every corner of the city.

For more information on transport around Toronto click HERE

Toronto is home to an array of hotel types suiting all business travel budgets. From luxury abodes to business hotels and budget-friendly beds. TripAdvisor has a comprehensive list of the best hotels in Toronto for 2019 HERE giving you the best overview for your budget along with recent up to date reviews of each property.

Toronto is jam-packed with areas waiting to be explored.
Here are our favourites:

The CN Tower is a popular Toronto attraction. Featuring the LookOut Level, Glass Floor, SkyPod, EdgeWalk and High-Speed Elevator. When you are finished Thrill-seeking, a trip to the 360 Restaurant is a must.

TOP TIP: Access to the LookOut and Glass Floor levels of the CN Tower are complimentary following a meal with the purchase of a prix fixe by each guest.

Just over 1hr 30 minutes away from Toronto itself are the Niagra Falls. Accessible via commuter train and bus service, the Niagra Falls are often referred to as a natural Wonder of The World but don't actually classify as an official “Wonder”, which is astounding considering their beauty and stature - one place to definitely tick off your list!

Located in the heart of Toronto, Kensington Market is Toronto's most vibrant and diverse neighbourhood. Home to bars, music, arts, crafts, coffee shops and shopping outlets, regular festivals are held here, and with the market open 7 days a week, there really is something for everyone here.

If culture is what you seek, then The Art Gallery of Ontario is for you. One of the largest art museums in North America, it homes a collection of close to 95,000 works ranging from cutting-edge contemporary art to European Masterpieces. As well as collaborations with museums around the world—the Gallery presents wide-ranging exhibitions and programs, taking special care to showcase diverse and underrepresented artists.


Toronto is abundant in delicious eateries for you to enjoy, Rodney's Oyster House does exactly what it says on the tin, providing a range of delicious seafood for you to enjoy including; Lobster, Crab and of course Oysters! Antler Kitchen and Bar is a celebration of local Canadian cuisine highlighting local and seasonal foods. Scaramouche Restaurant provides an exceptional dining experience providing sophisticated cuisine, and Cafe Crepe provides a French love affair, in the form of delicious crepes!

Do you have any tips for travelling to Toronto? If so, we’d love to hear from you! Just leave us a comment in the box below...