Business Travel Definitions: What is code sharing and what do corporate travellers need to know about it?

Before I joined the Account Management Team here at Good Travel Management, I trained as a Business Travel Consultant and worked on the front line of booking corporate travel for 25 years. Over the years, codeshare flight became more and more publicised and that continues as the world’s airlines form alliances around the globe to extend their coverage. In this blog, we outline the definition of code sharing plus the advantages and disadvantages every corporate traveller should know about.

A code share flight is a flight marketed by one airline and operated by another where carriers agree to sell seats on each others’ flights as if they were their own. Codeshares allow airlines to offer more destinations to their customers and capture additional revenue, even when they don’t cover a route with their own aircraft.

For example, you may book a KLM flight ticket, but Air France could operate the actual aircraft. As a result, flights that codeshare have two (or more) flight numbers, one for each airline involved in the codeshare.

Thanks to the massive increase in code sharing in recent years, passengers can often find tickets marketed by many different carriers at different prices, even though it’s for the exact same flight.

When you book a codeshare flight, you'll often see ‘Operated by’ in your itinerary, and you’ll usually have an asterisk before the flight number on your eticket. So if you’ve booked a KLM ticket but it’s an Air France flight it will say ‘Operated by Air France’.

It’s important to be aware of which airline to turn to if you need assistance or encounter any difficulties while travelling, because unfortunately it’s not always obvious when you’re booked on a code share flight. 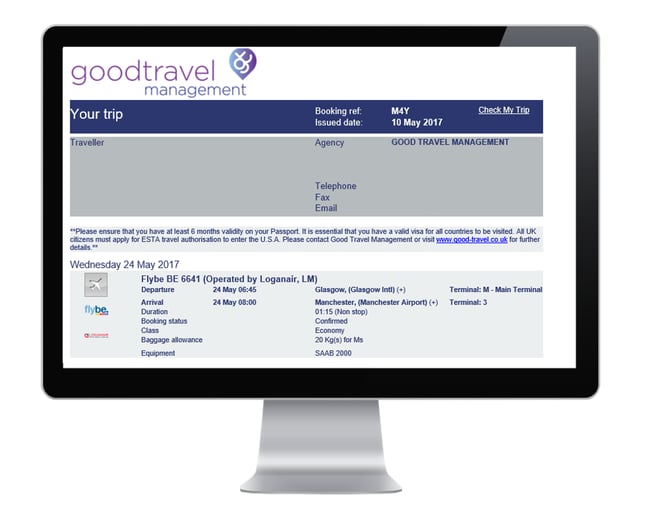 You want to change your ticket

Contact the airline who is operating your flight if:

Your flight gets cancelled at the last minute

And if your luggage goes missing, speak to the airline that last handled your baggage.

All major airlines have at least one or multiple code-share agreements to provide the best range of flight options to their customers. These can be on both domestic and international routes all around the world. For example, let’s look at British Airways.

British Airways codeshare with its partners in the OneWorld Alliance which includes:

One major advantage of using a code share flight is when a corporate traveller has a connecting flight. Codeshares provide clearer routing for the passenger, allowing travel to be booked from point A to C through point B under one airline's code, instead of a client booking their business travel from point A to B under one code, and from point B to C under another. Because all the flight sectors are on a single ticket, there shouldn’t be any issues with checked bags or being forced to do multiple check-ins. Co-operating airlines also aim to synchronise their schedules which reduce layovers and longer waiting times at busy airports.

#2 Travellers can earn frequent flyer miles on the booking airline

Corporate travellers can earn their frequent flyer miles with the airline they booked with, even if they’re not a frequent flyer member with the operating airline, providing both airlines are within the same alliance.

If you’ve always got your fingers crossed for an upgrade, it’s less likely when you’ve booked a codeshare flight.

#2 Can be more expensive

If the booking airline operates the routes as well as the airline it partners with, the codeshare flight will sometimes be the more expensive ticket.

It’s important to remember that all airlines offer a difference service, so even though you’ve booked with a particular airline, if the flight is operated by a different one, it’s their service that you’ll be experiencing. It’s always good practice to check baggage allowances, check-in time recommendations and the experience you should expect onboard.

If you need any further information on codeshares and how they affect your corporate travellers, speak to your travel management company or professional corporate travel consultant.

Andrea is a key member of our account management team, and uses her 30 years business travel experience to optimise our customers’ business travel programmes. Andrea has been with us since 2002 and before that spent almost 15 years working for one of the world’s largest travel management companies.
More by Andrea Harrison