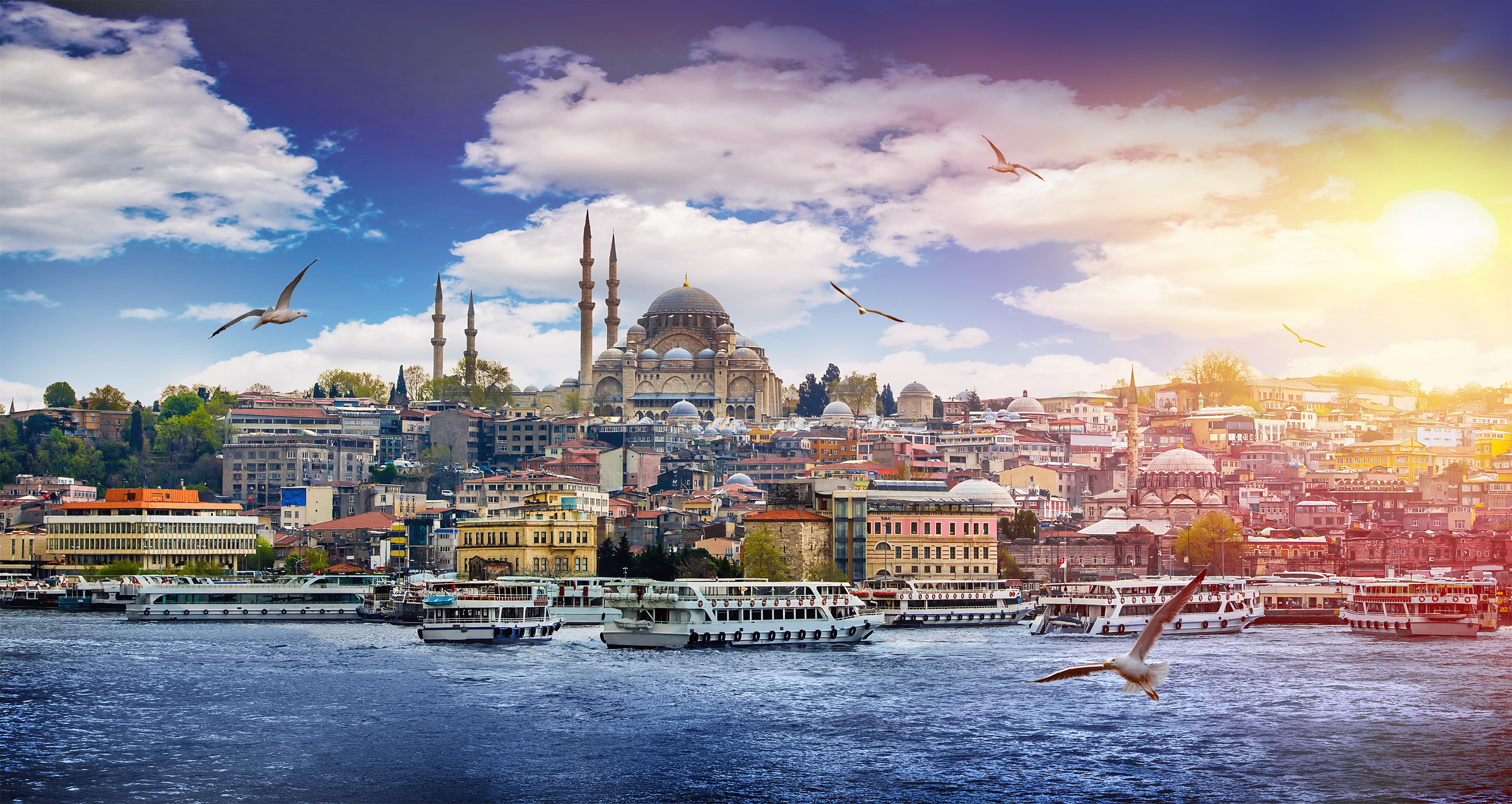 Istanbul, one of the Top 10 Business Travel Destinations for 2018, is the most populous city in Turkey and the country's economic, cultural and historic centre. It lies on both the continent of Europe and Asia and is increasingly becoming recognised for its economic outlook and business-friendly facilities and is also classed as one of the world’s most diverse and thriving corporate destinations

Two major business districts – Levent and Mashattan – reflect a robust economy, while the mosques and minarets of the historic centre have helped propel tourism arrivals towards 30 million annually.

As of 6th April 2019, Istanbul unveiled a new airport with Turkish Airlines basing themselves from the modern, $ 11billion project with authorities hoping “Istanbul Airport” will accommodate 90 million passengers a year,

Business travellers can expect a fantastic range of hotels, restaurants and sights in Istanbul. In this guide, we provide corporate travellers with all the information they will need when spending time travelling for business as well as some of our favourite places we have visited, weather forecasts, transport links, what to see, where to eat and much more…

It’s always good to check what VISA requirements need to be in place prior to booking travel. If using a Travel Management Company they will be able to guide you on this. For Istanbul, an electronic VISA is required, an e-visa costs $20 and you can pay using a credit or debit card, and apply up to 3 months in advance of your travel date. For more information please check the GOV.uk website.

Its recommend that visitors use public transport and especially the tram to get to the old town, as this allows visitors to move quickly and cheaply. Istanbul is extremely congested, during peak hours (between 8 and 9:30 and between 5 and 8 pm) it is very difficult to move.
To use all public transport in Istanbul (boats, subways, buses, trams, etc You will need the magnetic card (Istanbul Kart) which acts like an Oyster Card in London. You will find them in small kiosks near all metro stations, piers, and bus stations.

There are two lines in service, the T1 line from Kabataş allows easy access to Sultanahmet and the T4 line that goes north-west of the city. Running from 6 am to 11 pm, its an extremely clean and well air-conditioned mode of transport.

Taxi (Dolmus)
Dolmus are shared taxis which operate 24/7. They are fast, economical and widely used throughout Turkey. They run on a specific path and leave when they are full (8 passengers). Along the way, passengers can get out where they want, and the payment method is simple, once seated, passengers state their destination to the driver who in turn will tell them the price.

There are 400 bus lines in Istanbul, the majority of them serving until midnight every night. With the exception of Sultanahmet (accessible by tram) buses go all over the city, with destinations and major stops marked on yellow signs on the sides of the buses themselves.

For information on the Istanbul, bus timetables click HERE

Istanbul is split between two areas, Sultanahmet and Beyoğlu. Sultanahmet is close to major sightseeing spots such as the Hagia Sophia, the Blue Mosque, Topkapi Palace, the Basilica Cistern, Grand Bazaar, With Beyoğlu mostly known for its cosy neighbourhoods (including Cihangir, Galata), and a wide array of restaurants and cafés, the are is famous for  Istanbul nightlife.

Tripadvisor has a comprehensive list of hotels best for business travellers along with the top 10 budget hotels.

Top things to see and do:

Whether you're spending free time in between meetings or adding on some “Bleisure” time to the end of your stay, a trip to Istanbul isn't complete without a visit to the following areas.

Hagia Sophia Museum - Hagia Sophia is the former Greek Orthodox Christian patriarchal cathedral, later an Ottoman imperial mosque and now a museum in Istanbul, Turkey. Built in 537 AD at the beginning of the Middle Ages, it was famous in particular for its massive dome.

The Grand Bazaar - The Grand Bazaar in Istanbul is one of the largest and oldest covered markets in the world, with 61 covered streets and over 4,000 shops which attract between 250,000 and 400,000 visitors daily. In 2014, it was listed No.1 among the world's most-visited tourist attractions

The Galata Tower - Known as the Christea Turris by the Genoese, is a medieval stone tower in the Galata/Karaköy quarter of Istanbul, Turkey, just to the north of the Golden Horn's junction with the Bosphorus.

When it comes to food, Istanbul doesn't disappoint! Here are some of our favourites:

The Deraliye Ottoman Palace Cuisine Restaraunt has been creating delicious food for over 35 years. Situated in the heart of Old Istanbul, next to Hagia Sophia and a few steps from Topkapı Palace, Deraliye Restaurant offers a selection of dishes that used to be served at the court of the Ottoman Empire.

The Istanbul Ottoman Kitchen is a restaurant situated in front of basilica cistern, serving an array of dishes from Mediterranean, Barbecue, Turkish and Middle Eastern backgrounds to visitors and locals alike.

Sultanahmet Ottoman Fish Terrace House is a moderately priced restaurant overlooking the Bosphorus and offers an array of Seafood, Mediterranean and Turkish dishes with spectacular views, and is a real treat for visitors.

Kiss the Frog is described as the most entertaining seafood in Istanbul!, an experience not to be missed. Favourite dishes include Octopus Tandoori Pizza from the wood-fired oven, served on squid ink and made with whole wheat sourdough. For sushi lovers, the Rich Frog blending shrimp, surumi and octopus is a must-try.

It can be really difficult adjusting to a new culture when travelling for business. The GOV.UK website has some really useful information on best practice when visiting Turkey. From local laws and customs to health, terrorism and everything in between, it's essential to be prepared before you travel.

Do you have any tips for travelling to Istanbul? If so, we’d love to hear from you! Just leave us a comment in the box below...