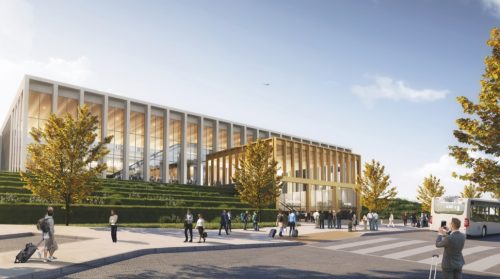 Leeds Bradford Airport has revealed plans to build a £150m terminal as part of its ambitions to massively grow the airport and support greater prosperity for the wider region.

The new strategy is much more ambitious than the current plan to expand the existing terminal building, which was part of a £25m investment programme.

The airport’s chief executive Hywel Rees, who joined eight months ago, is spearheading the scheme. He had previously spent five years in an asset management role with the airport’s owners AMP Capital.

Rees said: “This proposed development is hugely exciting for Leeds Bradford Airport and the North and replaces our previously approved plans.

“For more than 55 years, LBA has provided an international gateway to and from Yorkshire.

“Our vision is to serve our region as a truly outstanding airport and to profoundly change the perception and reality of customer experience for passengers. To do this we need a terminal that meets the needs of the future in passenger flow and energy efficiency.

If approved, this upgrade would create a modern airport terminal, classified as ‘excellent’ by the BREEAM sustainability standard, which is awarded only to the most environmentally efficient buildings internationally. Completion of the terminal, which is intended to open to the public in spring 2023, would also enable LBA to meet its target of net zero carbon emissions from airport operations.

Features to enhance the passenger experience include better surface access, with the site located nearer to the proposed rail link, clean and airy interiors, improved shopping, restaurants and bars and excellent access and comfort through from arrival to boarding.

Leeds Bradford Airport is only the UK’s 15th busiest by passenger numbers. Its 4m annual passengers puts it behind Liverpool, Newcastle and East Midlands. The new terminal forms a key part of the airport’s ambitions to increase passenger numbers to 7m.

Airport bosses expect the investment would make the airport more attractive to airlines and to travellers within their catchment area, who often choose to travel further to fly from Manchester, East Midlands or even London hubs.

The new terminal building would be closer to the railway station that is also being planned for the site.

*Information taken from The Business Desk